Skip to Content
Home / Home / In the world / Our pregnancy story

When David and I got married we kind of had a plan that when we turned 30 we would have a baby. In my head this meant that on 29th birthday I would go off the pill so that we had baby number 1 by the time I was 30. Well… on my 29th birthday we were so not ready to add a smaller version of ourselves to our family yet. David may have been, but I kind of think he’s always been ready for children. I’ve been the more hesitant one, especially when it come to natural birth. David and I have also been and are still very keen to adopt children, we just weren’t sure which way to do it first – natural or adoption. Luckily God saw my heart – worked through my issues and answered the question of which way to do it first.

My hesitations to have a baby

My brother has William’s syndrome. It’s a genetic disorder where there is a depletion of 27 genes from chromosome 7. I was fearful that I would also have a baby that had William’s syndrome. The fear of having a baby the same left me with the thought that if it did have this I would have an abortion. I was like, “no, I’m not doing this”. I had tea with my bestie one morning early last year for tea and we chatted about this fear. She reminded me of my view point that no matter what people say the minute conception happens that lump of cells is a baby and how I always say abortion is murder. I then changed my view point and decided that I would never ever have a natural pregnancy. Abortion was not an option and I did not want the risk of having a baby with Williams syndrome.

God however had different plans for my attitude.  He gently started working in my heart and He started to remind me that He is indeed a good, good father who won’t give me a scorpion, (Luke 11: 11 – 13). It took me a while to put this stake in the ground and stand on Gods truth. I think this took me most of last year, until the middle of October if I remember correctly.

When God told me it was time for a baby

One random day in October/November I heard God say audibly to me, “It’s time to have a baby”. I was like, “Great God, but you need to tell this to David”. I then went and told David what God had said and he was like, “Great! I knew it”. I then said to him, “no, no you need to pray about this and ask God to confirm it. I want a line in the sand.” David was so ready to have a baby he kept drawing lines in the sand when went for walks on the beach. I was like, “those don’t count.”

The process of adoption vs natural and seeking God

We then started discussing if we should adopt first or have a natural pregnancy first. We made list of pro’s and con’s, research adoption agencies, emailed them and then decided we would start the adoption process in January this year. We then also prayed and asked God to guide us in which one He wanted us to do first. I kind of thought we had it all packaged in a nice little box with a bow on it. My plan was to start the adoption process in January and to go off the pill and see what happened first. Oh how God must have been laughing at me…

One evening in November or early December, I can’t really remember, I was sitting reflecting during worship at church and God spoke to me and He said, “When are you going to stop fighting me on this, I told you it was time to have a baby”. I sighed and said back to Him softly, “you win”.  I then told David over supper and we decided to start trying for a natural baby. God answered our question of which way we should do it first, especially when we found out we were pregnant two months later.

We definitely still want to adopt children, but we haven’t started the adoption process yet but we plan to start soon. The process to join an agency is quite lengthy with lots of interviews, tests and home visits but we’re ready for the challenge. It can also take months to years to complete the process and then to get a baby could also be a long wait so we want to start soon. We’re still deciding if we want to work with a semi private or government adoption agency. I lean more towards a government agency for numerous reasons but that’s a post for another day. 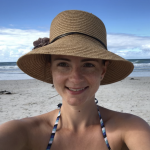 A blonde behind the wheel kind of day